This was a long winter. The night snuck in early, and stayed overtime. The snow piled, snow on snow, and I would complain–except I can’t, because Boston. No one got as much snow as Boston (as they like to remind us). And what snow we did get–the mounds, the piles of it–I sailed through, straight up Mayflower Hill, what with the all-wheel-drive and snow tyres.

Sometime in February, while the sky was still shrouded, J. told me she’d be picking fiddleheads, come spring. (I’d heard of this).

“Sure,” she said. “The snow’ll melt. Then comes mud season. And then–” she described how you pick the first edge of ferns, this Maine tradition of gathering fiddleheads as they uncurl. They just come up overnight, she says, and you gotta get them before they grow out into long, leafy ostrich ferns, spoilt for eating. (This is how I remember our talk, anyway. I remember how it suits me.)

“People sell them in the markets and at the side of the road,” L. remarks from across the break room, looking up from her magazine.

She nods. “We’ve got a secret patch, up north an hour from here.”

And there’s a long story, about her brother’s wife’s sister’s cousin. She promises to take me there, when spring comes. Be ready.

Comes the middle of April, and I’m ready. So ready. Spring should be here — except it’s still snowing:

Our garden boxes are sodden, covered in melting ice. A layer of flurries sweeps down. The grass is suspicious of the cold air, still in hiding.

My friend in Oregon, depressingly, posts pictures of short sleeves and summer flowers.

“You ready?” J. asks one morning, when the Boss brings down homemade banana bread and biscotti to sweeten us up.

“What do I need?” I say. J says I need a long sleeve shirt and light colored pants to keep the ticks off, a hat and mud boots, a bag for picking. It’s dirt roads–we’ll see if the mud’s too much for the cars, we may have to walk.

The fiddleheads will come up any day, and we have to be ready.

“You’ll have to look for the right ones,” J. warns me and L., “the green ones and not with the white fur. I took this lady up to our spot, showed her the best ones, but she kept picking the white ones anyway. Picked a whole bag of them, but those’re poisonous. So I took the whole bag and tossed it in the river. She was so angry–”

When I release my students early on the last sultry day of term, J.’s outside waiting. “You ready?”

“I’m ready, I just gotta get my keys,” I say, surprised at her appearance.

“You didn’t bring your keys?” She says.

With a huff, J. drives me to my building & lets me in the back, so that we can shave five minutes off our arrival. We head out into the unexplored country, cutting cross-wise of the rolling Maine pastures, which are starting to green with long grasses.

J. says there’ll be strawberries up this way soon, you pick them at a farm. We stop by a filling station in late afternoon, pick up her aunt and aunt’s cousin (or something), & then she hops in my car to direct us north, off the paved roads and onto the dirt ones. 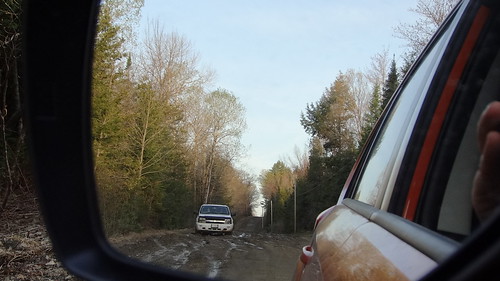 We lurch across ruts and through the mud, splashing through puddles. I wonder if Subaru suspensions are really all they’re cracked up to be, & who I’d call for a tow service. I wonder what it’s like to be stranded in country Maine. I lose attention of the muddy road I’m barrelling/lurching along.

After most of a heaving mile, we come to a clearing and park. We grab Wal-Mart bags & walk along the banks of a slim river, clambering over tree trunks and brushy bridges to the low islands. Eyes to the ground, we pass by the white-feathered fronds and aim for the small green ones. Often, they’re covered with a papery bark, knuckles just pushing out of the earth:

The taller stalks are all picked, fiddleheads already shorn off and stuffed in someone’s bag or pockets. But we keep moving, through steep muddy banks and pocketed islands, till we find a good patch. Finally, that cultural anthropology course in human evolutionary ecology comes in handy, with all its talk of optimal foraging theory: the way we choose between moving to the next spot and mining the good patches, the algorithms of the human mind.

We politely ignore other foragers, and wander apart, till everyone’s out of sight. The sun slants low, honeyed across the first hints of green. My back aches. A few flies buzz; rocks nudge at my distracted feet.

Quiet, river’s calm. I flutter and alight on rest.

After a few minutes, I’m tired and restless. But J.’s still moving between the fern patches. I follow as she leans around a tree, snaps off another cluster of stems.

“What do we do with ’em?” I ask, feeling for the papery husks and cool spirals in my bag.

“You’ll clean ’em off, either with a fan, or by rinsing them in a strainer, till they come clean. Then you boil–you need to heat the water all the way to a boil, put them in and have it boil again, at least fifteen minutes to get the poison out.”

I nod, slowly. She reaches down for another bunch of fiddleheads.

“You can put butter and salt on them, eat ’em while they’re hot.” J. pauses and eyes my bag. “How many you got there? Probably five or six pounds,” she says.

J.’s got twice or thrice what I picked, in the same amount of time. She’ll clean them to sell to the old folk. We pick till the sun begins to set, then wind the cars back out to the main road.

When I get home, I do as she says: clean and boil the fiddleheads, let them bubble on the stove. Pour into a bowl with butter, serve, and eat.

A hell of a lot of work. And delicious: 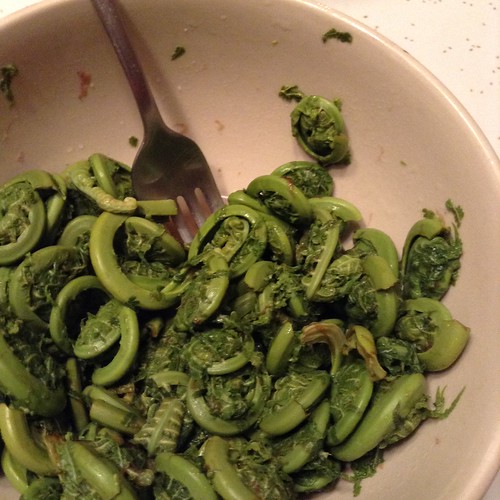 Postnote: for a while after, you could buy fiddleheads in the markets; now, it’s the pickled ones for sale in the tourist shops: 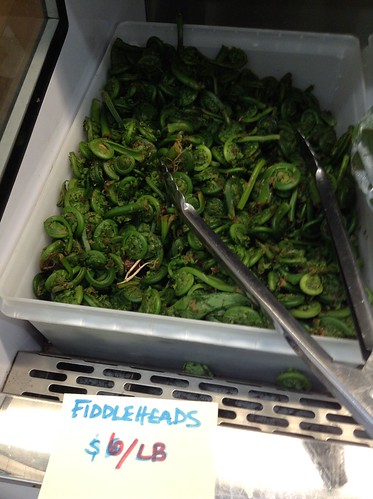 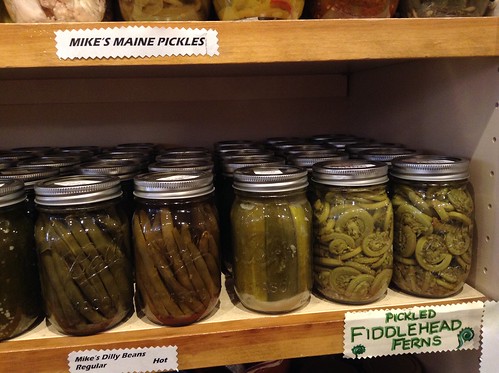 Also. Maine has turned from snow into this midsummer‘s day…

(And next up: Camp. Many Maine families seem to have a summer cottage to get away to. Stay tuned to see whether anyone is  ̶g̶e̶n̶e̶r̶o̶u̶s̶  foolish enough to invite the librarian from away…