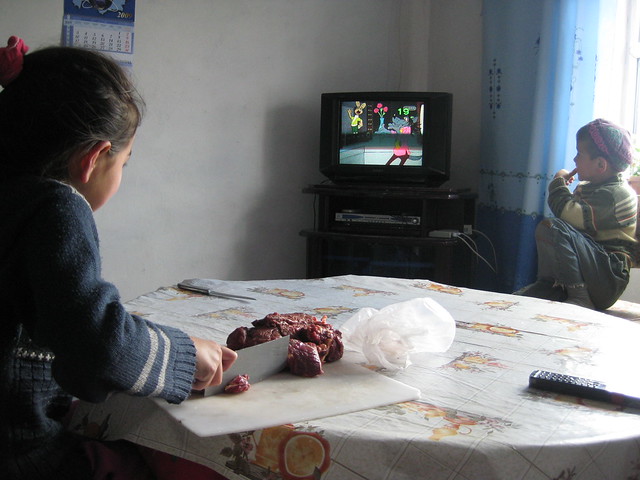 We’ve been back in the province center for almost a week now. We’ll probably be staying here for another week, as Professor Rose and Jamie leave Mongolia next week… and Sarah leaves for Kazakhstan at the same time. Life in Ulgii has fallen into a regular pattern – so that’s what I have to write about, everyday life.

I live with a host family about a twenty-minute walk from the center of town. They just built their house last year, and it’s very nice: an entryway, a storage room, a kitchen, a nice dining room (which they rarely use), three bedrooms, and a bathroom without a toilet. The toilet is the outhouse – where else? – outside.

My family consists of Mama, Papa, and four children. Mama and Papa go to work every day and get home in the early evening. While they’re gone, Flower (girl, age 19) cleans the whole house, scrubs the floors and rugs, and prepares the meals. Happy (boy, 14) reminds me of my brothers at that age: wearing the same clothes all the time, grinning and cracking jokes at the dinner table, cheating at cards, wrestling with his younger brother. Skinny (girl, 11) is a bit of a drama queen, making faces and faking sleep when Mama asks her to work. Strength (boy, 8 ) is little but has solid fists for punching at me and his siblings.

I wake up in the morning around 9am, as Mama and Papa are getting ready to leave for a day of work. Mama works as a teacher; I’m not clear what she does in the summer, but she goes to the school anyway. Papa works as a businessman, and drives a sharp red car at high speeds along the dirt roads. I think Mama and Papa are comparatively wealthy, but we still eat a lot of rice and baursak.

As soon as I wake up, I go out to the outhouse. I’m pretty proud of myself right now, because in the past week I’ve started using the potty on my own. For the first few weeks, the family dog would bark angrily at me whenever I stepped outside, and so I had to be guarded by the elementary school children… but now that the dog seems to ignore me, I can go outside without an entourage.

The bathroom is an outhouse with two stalls. From what I can tell, families dig a big square pit in their backyard, put boards across the top, and build a little house around it. When it gets full, they cover it and dig another pit. Inside of the outhouse there are newspaper bits in a pile. I tend to bring my own toilet paper: while the newspapers are interesting to read, I’m a little afraid that if I use them, I’ll end up with some propaganda about the glorious nation of Kazakhstan imprinted on my backside.

When I go back inside, I go straight to the kitchen for breakfast: tea in little bowls, and baursak (strips of bread). Baursak is amazing when fresh, but not so great when hard. It sits in a big bowl in the storeroom when we’re not eating it, so it tends to harden pretty fast. I bought some nutella from a local store a few days ago, so when Mama isn’t watching, I spread nutella on my hard baursak.

While I’m drinking my tea, I’ll pull out my Kazakh textbooks and dictionaries, and try to study. We’ve hired Flower to be my teacher, and she’s very intent about it. She prepares worksheets for me every day, complete with pictures and fill in the blanks. She also grades the worksheets with a red pen after I’ve finished them, which makes me feel very fifth grade! I think I’m averaging about 90%, mostly because when she adds words that I don’t find useful (like elephant, or casino), I say screw it and go back to my grammar worksheets. I think she’s adjusting to the fact that she has a very uncompliant student…

After studying Kazakh – and joking and practicing words with Skinny and Flower – I walk to town and meet up with the research team. We’ve tried to schedule one or two interviews a day. Usually we all walk over to someone’s apartment, tumble inside, take off our shoes, and sit around on their living room couches as we pull out our six matching notebooks and question binders. It has to be somewhat intimidating: six people (four white faces) tramp into your house and start asking what you think of migration, if you consider yourself a good Muslim, and whether the benefits of citizenship are better in Kazakhstan or Mongolia.

The interviews themselves are like playing telephone. During the interview, Sunlight rattles off the questions, slouched in her chair. She generally looks bored unless the interviewee is a handsome young man. The interviewee looks befuddled and asks for a definition, and Flower conscientiously translates each answer to perfectly match the English sentence structure of the question.

Sarah throws in additional questions in Kazakh. Jamie gets very intent as soon as we hit the religion questions, sitting stiffly, pursing his lips, nodding his head sharply, and writing as fast as he can. Rose quietly and desperately asks for translations. She doesn’t understand any Kazakh, and often when Cynthia and the Kazakhs are laughing at a response, Holly will be raising her eyebrows at the translators – this is an interview! I’m supposed to be recording this! Translations, people!

Towards the end of the interview, when the interviewee starts looking away and plaintively asking how many more questions, we smile our big American smiles and say «Thanks for the interview! Here’s a pen!»

…Yes, we’re paying people in blue pens with our project information printed on them. The pens are slow to get running, so before handing it to the person, Jamie scribbles all over his notepad with them. We learned to do this after giving out new unstarted pens, and having interviewees think that we just gave then a defunct blue pen for a two hour interview.

I’m sure that interviews don’t always go like this, and I know that we’re going to be splitting into smaller groups and using voice recorders soon, but for now I find the whole process rather bizarre.

After a few hours of interviews and note-taking, the professors dismiss us research assistants for the evening. As I walk home, I stop in a store to get food. By food, I mean Coca-Cola Light and chocolate, which is where my daily food budget seems to go.

The other day, I stopped and bought a 1.5 liter bottle of water and a Kit-Kat bar when I was halfway home. When I turned off the main paved road onto the dirt road leading to my house, I saw a woman standing and looking over a wall.

«Hello,» she said, «Where are you going?» I realize she’s a policewoman, with cloth badges all down her blue sleeves.

«To home.» I stutter in Kazakh.

«Is that water?» she asked, pointing at my water bottle, which was too large to put in my knapsack.

«Yes, water.» What did she think it was, vodka? Clearly a large bottle of water, says «water» on the side.

«You’ll drink it?» She looks at me suspiciously, like there are many possible answers to this question.

Here, imagine a long pause as the policewoman looks at the white girl speaking broken Kazakh, carrying a bottle of water (which Kazakhs don’t drink), and walking into one of the mudbrick residential areas (where tourists don’t go).

«Goodbye,» I say abruptly, and walk away without making eye contact. I have avoided eye contact with anyone in blue shirts since.

When I get home, in the early evening, I have some tea, type up my notes, and play cards with the kids. I’ve taught them to play Go Fish, War, Slapjack, and Speed, and they’ve taught me a few games that I haven’t quite figured out yet. They also play with a OLPC (one laptop per child) laptop that Happy got from school, and a miniature pool table the size of a doll blanket.

During tea, Mama also pulled out a bunch of sheep knucklebones, and proceeded to toss them like dice. Each side has a different name: sheep, horse, camel, goat. I know which side is which, but again haven’t figured out the point of the game.

We eat dinner around 9 or 10 at night. A few days ago we were served a huge platter of rice, and the next day a platter of meat. I kept thinking, you can’t mix these? We’ve also had dumplings, and other combinations of starches and meats. Last night we had another sheep’s head, set on top of sheep meat, sheep intestines, and noodles. As Papa was scraping lumpy white stuff out of the skull cavity, he asked if I knew what it was.

«You will eat it?» he asks, putting some on each child’s plate.

«No,» I shake my head quickly.

And no, I didn’t eat it. I had face-meat, bone marrow and some unidentifiable stomach organ last night, so I’m working up to brain slowly.

During dinner, we all watch TV. Sometimes it’s a game show, sometimes wrestling, sometimes news from Kazahkstan. If it’s between 9:30 and 10:30, we watch a Turkish soap opera, subtitled in Russian and dubbed in Kazakh. It seems to concern a beautiful girl with numerous stalkers, a rich man with business trouble, a mother and her estranged son, and two female coworkers who get into catty fights. Somehow they’re all related but I haven’t quite figured out how. Every house I’ve visited at this time of night seems to watch this particular soap.

After dinner, I’ll play with the kids, and go to bed around 11 or 12pm. I share a room with Flower and Skinny – they sleep in one bed, and I in the other. Then… up again the next day for more research…. so… hopefully this gives you some idea of what it’s like!