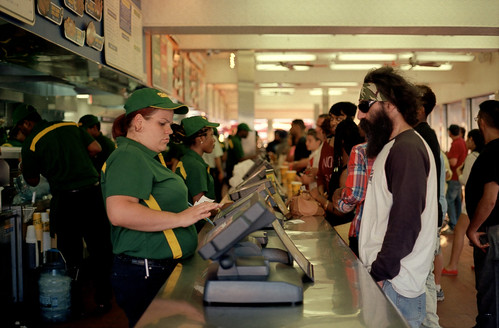 It is very hard to live in a class-based society.

When I’m with my college friends, it’s easy to agree with each other: “College isn’t for everyone. Let the poor work if that’s what they want to do.”

But then I talk with “the poor.” Last night at work I talked with Jesse. His career goal is to manage a store like the one we work at. He was raised by a single mom, who worked three jobs so that he could have a ‘normal’ life. But he never saw her.

“Now,” Jesse says with gladness in his voice, “she’s making $14 an hour, so she quit the other jobs. And we spend time together. But it took seven years of her working that job to get paid that much.”

With my degree, I hope to get a $14 an hour job a couple of weeks from now.

But I have a sense this is what our whole society is based on. How could Paris Hilton have such a luxurious life if Jesse and his mom weren’t working so hard to support her (and then, like our other customers, buying glossies to read about and envy her)?

How could I buy all my pretty clothes so cheaply if Chinese and Mexicans weren’t living at a subsistence level for my sake?

And how does it work so well… that the Hiltons stay at their level, and me at mine, and Jesse at his, and the Mexicans at theirs. It works so well, in a way, until I actually hear Jesse’s story.

And then saying that college just isn’t for him–it doesn’t work at all.