Note: Academic articles are great, but they’re often long and detailed. #articleremix lets us present shorter versions for a popular audience. This is a rewrite of my longer article on name changes; I’ll share others as I have time!

Have you ever considered changing your name? And what would you choose?

It’s not common that you hear of someone just changing thier name… and when they do, it often comes along with a major life change. Perhaps we join a new social or religious group, finish a doctorate, or join a new family. Progressive couples adopt each other’s surnames at marriage. A child takes a new name when adopted by a new family, as when my childhood friend went from Kelly Marie to Kelleigh Mayonna (only a child of the 1990s…!)

But adults also choose surprising names. One high school teacher went to court for the right to be called 1069—and he wouldn’t accept “one zero” as a substitute. A couple let their toddler name a baby Lala, for the Teletebbies. Jimmy White became Jimmy Brown to advertise for a British condiment. And one man filed for the legal right to be called Bubba Bubba Bubba—but still couldn’t articulate why.

Why do we care about names? 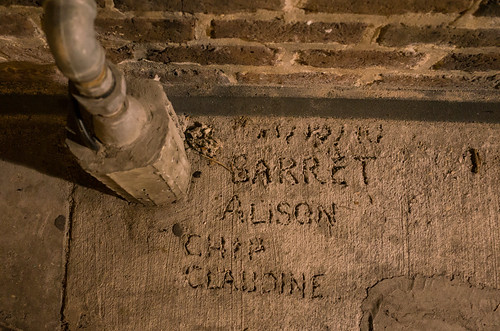 So names are important enough that we register them legally. But why?

Herbert Blumer suggests that human society is built on our symbolic interactions with each other. Names can serve as symbols, not just of a person’s existence but of who they are socially, being:

scripts for their lives, expressions of the beliefs and expectations of their parents, clues to where they fit into society and what their duties are. Names are human artifacts that can tell us much about the namers’ beliefs about religion and magic, social order, what parents want from children, how they seem often to value males over females, and how the members of the society regard the world in which they live. In short, names are full of historical, cultural, and sociological information (Leonard Ashley, 1996: 31).

The social meaning of our names connects us to our community. But it can also limit us, as when white / affluent / male names lead to more interview requests than names which signal less social value—even if two resumes are otherwise exactly the same!

This debate between personal and social meaning has been around for a long time. In Cratylus, Socrates debates whether our names are “natural” to this person, or just a “conventional” shorthand that could be applied to anyone. You have your name because of your squinched-up baby looks, your charming personality, your race or gender, or your parents’ values and desire for your future… and so your name represents you.

But in another sense, it’s just a label, and a rose by any other name would smell as sweet.

We’re more aware now of the complexities of gender, as in gender dysphoria, when social expectations of men or women don’t “fit” our sense of self. So perhaps other people have name dysphoria, a restless sense that their name harms them personally, career-wise, or socially–or just doesn’t represent them well.

Why does this happen? Well, American value individual choice! We can choose our careers, our religions, our social circles, and where we live. Yet our names and genders are still set from birth, and we’re told it would be silly to change them.

Yet in other places, names are less static. A Medieval person could perhaps move from being called Blessing as an infant, to Freckles as a child, to Bowman as an archer, to Underwood when he owns property, to Oldfellow when he’s buried (Jennings 1967: 144). This fluid names are great: Freckles learns what people think of him (hopefully nothing nasty!), yet his own choices may shape his future name.

That works in a small-scale society as a way of tracking social reputation as well as personal change… but it doesn’t work when you live in a modern state or institution that wants to track you over time.

Still, we add markers when we gain a new social status. A woman becomes “Mrs” or changes her name at marriage; a doctor becomes Dr., or an eternal grad student languishes as ABD. Similarly, medieval Europeans added Palmer to their name after a pilgrimage to the Holy Land, and Muslims still add Hajji after making the hajj to Mecca.

And on a more serious note, humans take new names when they come under new ownership. Adopted children or pets get a new name. People abducted or enslaved have their old names stripped away. Monks and nuns take new names when they join a new religious order.And women were once expected to take their partner’s surname, as part of a transfer in management of their lives and legal person.

But other times, we choose a new name when something inside us has changed. Researcher Oriana Bernasconi describes how the stories we tell about our lives change over time, noting that we experience identity elasticity when our ideas of who we are change over time. We also experience narrative elasticity when we re-tell our stories in response to changing ideas about the good person or the good life.

Perhaps you change your name because you convert, join a monastery, or deepen your connection to a religious group–Buddhists, Christians, Muslims, and pagan may all do this.

Or perhaps you take a new name when you change social contexts: Kelsey becomes Katya on study abroad in Moscow, or Aslan becomes Alan when he emigrates from Kazakhstan to Britain.

And others change their names as part of a social or political awakening. Even after they were freed, some African slaves kept names given by their former owners. Yet their African-American descendants may take new names that reflect an independent identity. James Brame changed his German surname to James Chikaodili Anyike (“James belongs to God for whom nothing is impossible”), hoping to highlight his freedom as an African-heritage American, and not the slavery that shaped his forebears.

Why not play with our names?

In early Japan, a man could be stripped of his name for not paying taxes (Plutschow 1995), and deposed Pharaohs once found their names scraped from public monuments. The push for newspapers to write about those who died in terrorist attacks, instead of those who killed them, comes from a similar impulse: let’s use social pressure to praise those who live well, and shame or erase those who do harm.

Given how important our names are, changing our names can be a great way to show new aspects of ourselves to the world. Yet legal name changes are costly and confusing.

So perhaps… it’s time for us to go back to creative nicknames! If we can play with our hair color, our gender, our clothes, and our careers, why not our names? As we change how we’re identified, we can express different parts of ourselves to ourselves and to the world.