On a sunny day this past June, my friends Linnea Katzen* and Colin Hill* got married.

Right away, people asked Linnea for her new name. They called her Mrs. Hill.

She didn’t ruffle feathers in public, but her discussions in private were fierce. Linnea wanted to keep her own. Yet Colin wanted to keep his, and have his partner and any small ones join him in his name.

So they talked over the options: merge her identity into his (Hill)? join their identities (Hilzen)? hyphenate (Hill-Katzen)? keep their birth names (Mr. Hill and Ms. Katzen)? 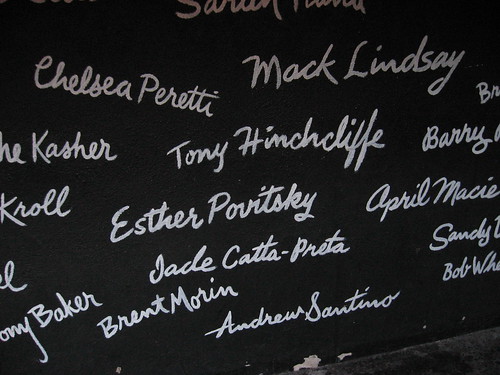 None of these are particularly lovely, but each could hold meaning. Yet for me, this seems like a design problem, a logistical issue not just of carrying on or changing tradition, but of meeting several requirements at once.

More broadly, I’m struck by how our traditional naming customs no longer fit our current values. As early as 1855, Lucy Stone negotiated to keep her birth name at marriage. Yet even in the 1970s, married women had to use spouse’s name to vote, bank, or get a passport.

Some 17% of women kept their names in the 1970s-1990s. Now, only 8% do, or maybe 20% keep their names while 10% hyphenate. Numbers vary. Jewish women keep their names more often than Catholic ones. And among elites with a wedding announcement in the New York Times, some 30% maintain both of their birth names.

What about me? Well, my husband’s sister gave us a plaque with his surname for our wedding.

Then his father asked if I’d take their name. His aunt asked when I’d join the family on Facebook. And my aunt asks when he’ll change his name to join our family!

It’s a familiar conversation, as I wrote my thesis on name changes: What’s the overlap between personal identity and social identity? Which changes do we praise, and which do we make fun of? Who gets to decide when to change their name?

I mean, there’s a lot of variety. Medieval English folks got a new name when their role in the community changed (they didn’t have last names until the 1400s!). Blackfoot men changed their names throughout life while women didn’t. Japanese men take a wife’s last name if joining her family business. Italian and Chinese women don’t change their last names at marriage, and Greece and Quebec require them to keep their birth names. Muslims rarely change the wife’s name, and one woman married to a Korean writes that in Korea, “it would be very strange for me to have the same family name as my husband.”

More broadly, Japanese feudal society erased your name if you pissed off the rulers, while Latin Americans pass down both parents’ names to their children.

And some cultures—like ours—give you a lot of flexibility in naming.

So below, I’ll think through what we use family names for, and what this means for contemporary couples.

Design Goal 1: Unity (Bringing Us Together)

In Anglo culture, we have a long tradition of expecting that families share a common name. In part, this comes from a society where men were legally at the head of a household, owned all the household property, and could even beat the women and children—as long as it wasn’t too severe. All this was drawn from the British and early American law of coverture, where women came beneath their husband or father without a legal or financial standing of their own.

Yet on the positive side, there’s a sense of unity when everyone in a household shares a common name. But how do we decide which name it is?

I realize that not everyone has this design goal; in complementarian relationships, couples may well decide that the two partners have different roles and rights. This again draws from history, where the guy’s name becomes the couple’s joint identity. We hear this at the end of some weddings, as Elspeth Lerner becomes Mrs. Ward:

“I now present to you Mr. and Mrs. Thomas Ward.”

My own greats-grandmother moved from being Celia Lowe to Mrs. Stanley Sparling, even in her personal correspondence with lady friends. Yet this expectation is changing; as a colleague commented recently:

Alright, so everyone who sent Christmas cards to both of us under my husband’s last name are gonna use my last name next year, right? Right?

Other men and women have critiqued this because of the subliminal messages it sends. As Jill Filipovic writes, covering the woman with a man’s name still signals to our minds that the partners don’t have equal public standing:

“Part of how our brains function and make sense of a vast and confusing universe is by naming and categorizing. When women see our names as temporary… it lessens the belief that our existence is valuable unto itself, and… feeds into a female understanding of self as relational – we are not simply who we are, we are defined by our role as someone’s wife or mother or daughter or sister. [Yet] men rarely define themselves relationally [as belonging to a woman]. And men don’t tend to change their names…”

Perhaps it’s delayed marriage and a greater public role for both sexes that drives this change. Unlike couples who marry just out of high school, contemporary couples who marry halfway through adulthood already have separate public presences, educational and career presences, legal documents, publications or film credits, financial holdings, and a social media presence of their own. When both have professional careers, it makes less sense for either Dr. Elspeth Lerner or Thomas Ward, Esq to switch their names at marriage.

My Swedish grandfolks Pål Svensson and Brita Jönsdotter named their daughter Else Påhlsdotter, who married Ola Jenessen, and so on. The tetris-nature of such a system is curious, honoring each father in turn. Yet it’s easy to lose the common thread across generations.

For purposes of lineage as well as taxation, western European families have handed down the same (male) surname for generations, giving some family names great continuity and strength. Think of the Sanders family who can trace 1000 years of enfolding people into a single name. In fact, this is so built into western genealogy that software programs often assign the father’s last name to the child automatically.

And the last name matters—when you’re born with it, it defines your identity as part of a larger family or cultural community. So one challenge for modern name design is the tension between a desire for continuity over generations, our preference for visible social unity as an family unit, and yet maintaining a separate standing for the sake of careers.

Design Goal 4: Passing it On (Both Parents Count)

But then we want to represent not just our ancestors, but also ourselves. Early European philosophers and doctors though the male supplied all the important material, planting it in a woman as the ground in which an infant could grow. (Look up homunculus for fanciful pictures of a tiny, tiny person formed in full before it grew in the mother).

Now, we tend to recognize that both partners contribute genetic material—as well as a lifetime of raising the infant. (As Linnea memorably added to the discussion: “if I have to push it out of my vagina, it’s having my last name!”)

While in many cultures, a child may be attached primarily to the mother’s family or clan (in which the mother’s brothers play a paternal role), most American fathers expect to pass their name on to the next generation, so that Lucy Green and Jack Meeker give birth to Inez Meeker.

In fact, 70% of Americans assume a child will have its father’s name.

And even if you called the child Inez Meeker-Green, the mother’s name would be dropped in the next generation.

I once ran for my university student council… and lost to a man named Tyler Winner. Competing against a candidate named “Winner” seems a bit unfair, but it’s an effective bid on his end. Some couples select which last name to share because of its greater power in society—think of a man changing his name to Kennedy or Rockefeller, and what he would gain.

Others choose based on aesthetics or meaning, perhaps giving up a long, complicated, or negative name (Roach, Pugh?) for one that is easier to spell or more lovely. William MacAskill writes that he and his wife chose an ancestral name from her side because of its strong heritage and the heroes it represents.

We still have a lot of explicit beliefs around last names: in one survey, students assumed that a wife who didn’t take her husband’s name was less committed (while not assuming that him refusing to take her name implied less commitment or identification with the marriage on his part). Because of such implicit pressures, Filipovic suggests that if couples want to share a name, they push back by taking the lady’s last name:

“Men… don’t grow up under the shadow of several thousand years of gender-based discrimination. So if you’d rather your family all shared a name, it actually makes much more sense to make it the woman’s.”

Similarly, William MacAskill was astonished that 50% of Americans think a woman should have to take her husband’s name at marriage. As above, they both changed their birth names to MacAskill, yet this subversion of cultural norms got him pushback:

“When I tell people I’m changing my name, I’ve met raised eyebrows, confusion, or aggressive questioning. No one’s batted an eyelid when she’s told others the same.”

While it helps to have a system, MacAskill advocates that we consider other priorities if deciding on a joint name:

“You might say that we need some rule, and that taking the man’s name is as good as any other. But is this true? Why not go with whichever name sounds better? Or which name is associated with the coolest people?

“In general, we are happy with the idea of molding our self-image in a whole number of ways, including how we dress, look, and talk. And having the right name is a big deal—affecting expected grades, likeability, success at job applications, and likelihood of having your Facebook friend request accepted.

“So why the double standard when it comes to marriage?”

So what do you think? Why the double standard? And what would influence your decision to change or not change your name?