In 1861, Lotte Fischer crossed the Atlantic on a steamship that likely took seventeen days to travel from Bremen to New York. She reported that she was a German girl, travelling alone. Within a few years, she married a German immigrant named Johann and settled in Ohio. But as she got older, she listed herself as French on the census. Why?

Well, it seems that Lotte came from Alsace-Lorraine. A province between France and Germany, Alsace moved from French –> German control in 1870, was taken back –> by France after WWI, then seized –> by Germany in WWII… and –> returned to France after the war. Whew! Perhaps this is why Alsatian emigrants show up as French-German-French-German on early American censuses. Alsatian doesn’t really count in America, but French and German do.

There are Alsatian emigrants on both sides of my family. Yet we assimilated into America generations ago, so claiming an Alsatian identity is a bit of a stretch. Like many white Americans, we nurture a mélange of ethnicities through ritual: sauerkraut and bratwurst, a high-school elective in French or German, days for Sinterklaas and Santa Lucia, a visit to Sweden or along the Rhine. Like a lot of middle-class heritage tourists, black or white, we have a way of purchasing and solidifying our ethnic identity through travel.

So two years ago, we rounded out those travels with Christmas at l’Ecomusée d’Alsace, an Alsatian reenactment museum in Ungersheim, France: 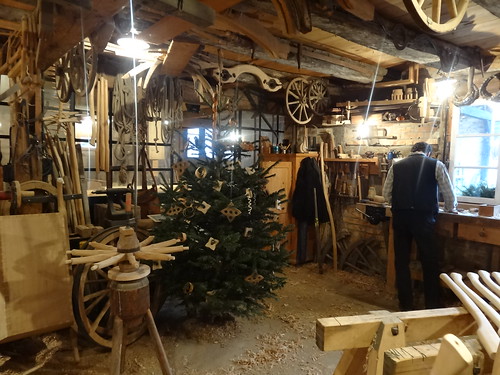 On Christmas day, the museum was crowded with French families enjoying the exhibits. But could we, visitors from a branching past, really belong? 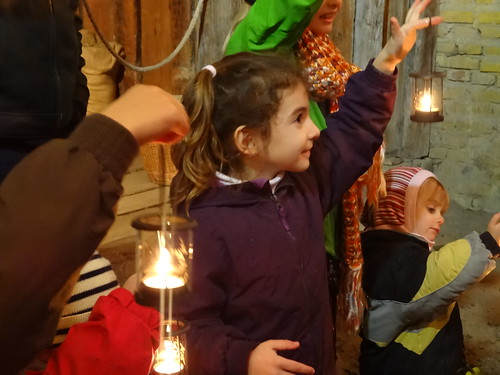 “All around me, people took pride in their ethnicity. When my peers would ask about mine, I did not know how to answer them. Is being white my ethnicity? What is my culture? Who are my ancestors? What is my heritage?” – Carolyn Molloy

The holidays feel like a time for heritage. But heritage is complex for assimilated, middle-class white Americans. Many of the ways we belong seem hidden to us, and making a big deal out of ethnicity seems silly.

So we often do it on a symbolic level. Although I’d enjoy the floppy hairbows worn by Alsacien women, food is the low-hanging fruit for American ethnic identities, along with commentary and conversation: your hair looks Irish. Is your last name German? Your face looks kinda English. Какой народ? I made you our Scottish tablet! What state are you from? Minnesota? There are a lot of Swedish there! Where did your family come from?

Most native white Americans still list a European ethnicity on the census (Lieberson & Waters 1993/McDermott). Choosing the ancestral groups that have meaning in our own lives and culture, we keep ethnicity alive through ‘affinities for certain cultural practices’ (Waters 1990/McDermott) like food, languages, and holidays.

“Even though my ancestral heritage includes these various [European] groups of people, I am not a member of  these groups. . . what would an American ethnicity look like if “whiteness” was not… being an American?” – Fred Hammond

Being ‘white’ by race gives many benefits, mostly invisible because they’re hidden beneath the surface of American culture. Instead, many young white people experience their own race is negative, painful, uncomfortable, or boring— a ‘nothing or a vacuum’ (McDermott, p. 248).

Yet ethnicities are lighter, a thin identity. The Irish, Italians, and Slavs have been absorbed over time, and are now assumed to belong. White genealogies are easier to trace than the origins of many black Americans, if still complicated. Some of us don’t have to be anything else but white–unless we want it.

But in an America focused on diversity, we still want personal culture. And many of us do this through food. When one author tries to find an American ethnicity beyond white and black, he moves instinctively to food–recipes created in American kitchens, not European or African ones, as a sign of a cultural identity shared by all contemporary Americans.

That’s a long way to say that in trying to use up some crème fraiche, I gravitated to recipes for flammenküche, a pizza first made in Alsace. You have several options for making this.

a) Super-easy version: Trader Joe’s sell a frozen tarte d’Alsace–buy and pretend you made it yourself! 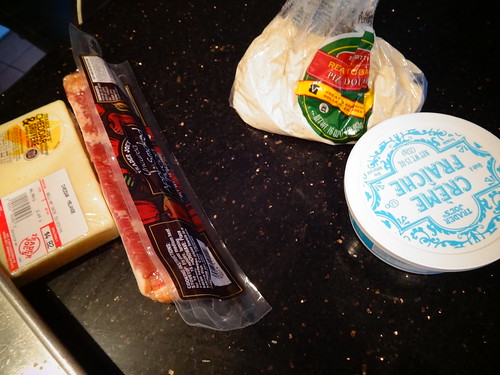 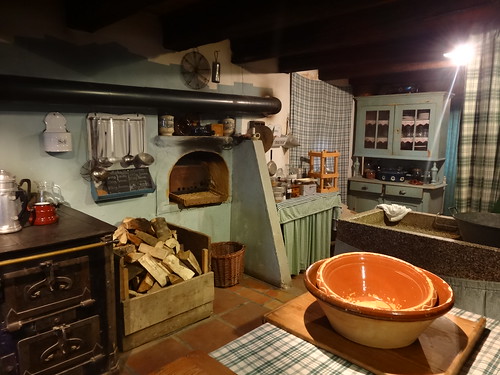 We chose the intermediate option above. To do this… let pizza dough rise 20 minutes, while you heat oven to 450’ and get a relative to chop onions.

Take knife away so she doesn’t stick it in her face when she starts rubbing her eyes with onion tears. 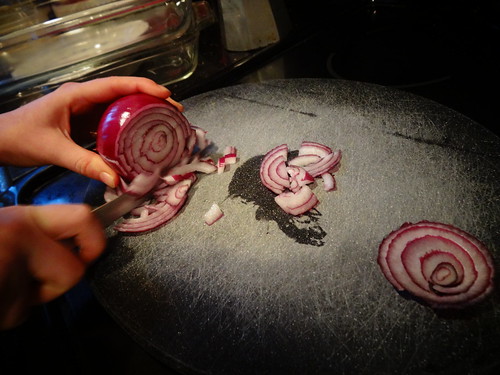 Online recipes suggest you thinly slice bacon or ham and raw onions, then bake with the pizza dough. We pre-gamed this by frying it first: 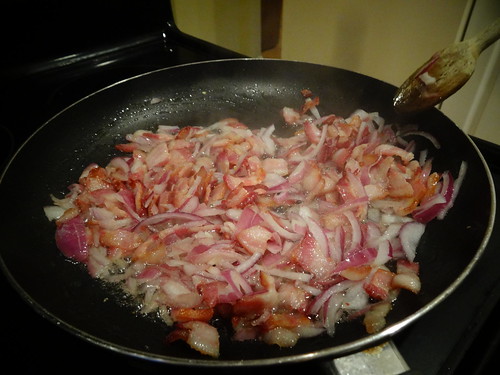 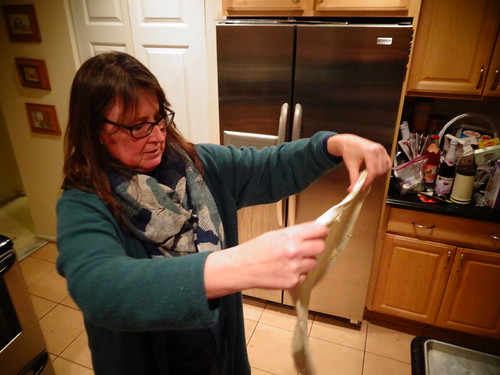 Then, spread crème fraiche (or cream cheese, or fromage blanc) over pizza dough. You can add gruyere or emmental for more cheesy goodness: 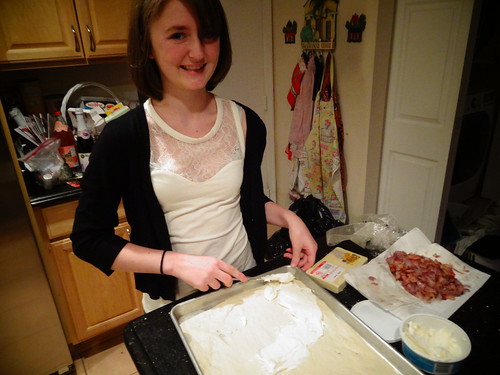 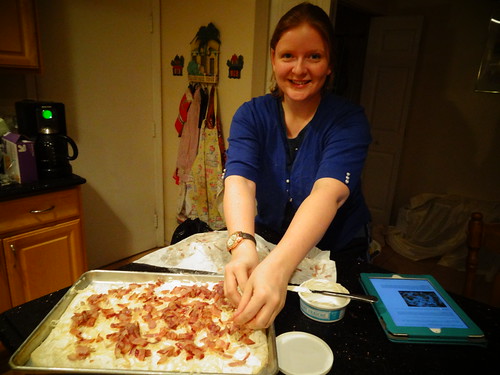 Wait a while. Eat Christmas cookies to excess, so as not to slight other ethnic heritages. 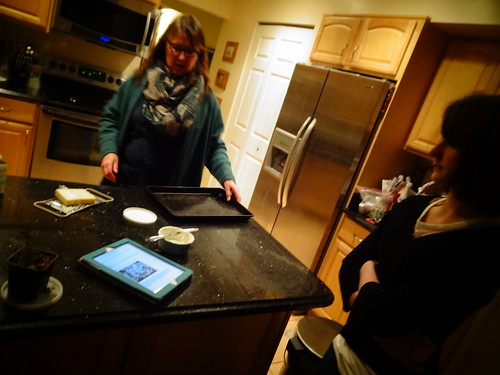 Pull pizza out of oven. Slice. Devour rich, hearty goodness immediately, sharing with visiting relatives from across the country:

Results? Delicious, and we’d definitely do it again.

Well, at least that’s something…