My first encounter with missionaries—like that of so many children—involved presents. A Christmas bauble from Burkina Faso, given out to each child at a small church in Ohio. A stick of Juicy Fruit from the American woman in a burqa, for answering the Why Jesus Saves Us question.

Growing up as an evangelical, I knew that missionaries were Out There, Doing Stuff to Save People–and stopping by once in a while to ask our parents for money and give us presents.

Then, in my late teens, I had the chance to live for a summer with missionaries in Eurasia. There I met men and women struggling to stay afloat. They were strong-minded, socially unsettled, persistent, desiring of change — and slow to make converts. Our relationship didn’t last, but I took away a strong picture of Missionary in my mind.

I’m not interested in being a missionary, but after that experience I decided to study them. So, after a year of academic articles and grad school conversations that were critical of the impact of missionaries on society–staying ironic, detached, hipsterish–I returned to Eurasia to study them for real. Interview people, observe them… and perhaps come down from on high and zap these people for their imperializing sins.

It didn’t quite work out that way.

“I’ve been doing this research on missionaries,” I told a colleague after returning from the field. “And I’d like to continue…”

“But then you’d have to be around missionaries,” he responded, grinning over his pint of beer.

I laughed… but inside I was thinking… actually, I kind of like missionaries…

…and indeed, my first fieldwork went really well. The people I shadowed were funny and perceptive, quick to admit their own flaws, and warm in relation to both their local friends and to secular expats. Many of my cultural concerns fell away when they brought up issues of colonialism & privilege—before I could say anything.

But I’ve been caught up on the reporting side. I’m still left with the issue of “representation,” or how I present my research to others.

See, missionaries are bad. Or they’re God’s gift to mankind, depending on where you stand. While examining these people, I began to notice negative pictures woven in and out of our popular culture: The Inheritance of Loss. Fieldwork. Black Narcissus, and many academic articles were similarly critical as Bob Priest has noted in Current Anthropology.

So striking the right balance in presenting others, I realized, is hard. I mean, critical is what we academics do! And especially what we do for people who are Not Us, but who come from similar positions in our home society, who interrupt our fieldwork sites, who speak from perspectives we find alarming and don’t understand. And personal bias aside, social scientists are trained to analyze interactions, write about it, and critique what others write. If you enter the fray, you’ve got to expect—and dish out—critical.

Still. After all this background reading, I hardly feel the need to be critical of missionaries; everyone else is doing that so well.

Bible Study Time: “Out of a Good Man…”

So instead, I’d like to draw you a picture from my old diary. It’s what I saw as I listened in while studying missionaries in Eurasia a few summers ago:

Imagine it. I’m curled up on a pillow in a corner of a two-story house, writing cryptic notes in my diary as I listen to a meeting of a team of missionaries. Or “workers,” as they call themselves. About 15 adults and 20 children have gathered to eat, gossip, and talk about how to live better as strangers in a strange land.

But first, the leader, Leonard*, starts with a prayer. Every curls down their heads. When Leonard pauses for breath, others join in. They ask God for wisdom about upcoming legislative changes. They pray for both locals and foreigners to have flourishing lives. They ask God to make clear whether travel plans across borders are wise. (These requests for prayer about visas float to the surface, again and again — locals getting visas to go abroad, foreigners getting visas to return after a holiday. This, I note: prayers for people they love, suspiciously religious people, to be approved by the governments that measure and border our worlds.)

As we pray, toddling tow-headed Noah plays with his plastic Buzz-Lightyear gun. His mother pulls him to her knee, joking that the gun makes “Satan zapper” sounds. When lightning strikes close by, portly Dale from across the room asks if anyone has unconfessed sins– “And if so, please go outside, away from us!” he jokes.

Each individual has their own bible–big, small, digital. Everyone is told to open their bibles to the book of Luke, Chapter 6, verse 45. A girl next to me pulls out a pen. I squint at the words in front of me: Out of a good man comes good, out of a bad man comes bad, for out of the overflow of the heart, the mouth speaks.

Leonard focuses his thought around this verse, saying: “Guys, at the retreat, I spent one whole day dwelling on this verse. And my question was, what am I storing? Am I constantly storing up good things, so that I do have something good flowing out of me?”

He goes on, and my mind wanders, ice-cream-sedated, to the buzzing flies by the window, the garden outside. My field notebook falls into my lap.

“Hey, at least pay attention!” Leonard says. I snap my head up.

“Embrace purposefulness,” he tells the crowd, not looking at me. “Boy, I want to be making sure that I take the time to make sure I’m storing up and making good choices, storing up things – good treasure – that I can tap. That I really have something of value to give to someone else. Is there enough good in me in the crunch time – that what comes out of me is good?”

Leonard reminds his listeners that each one of them were formally trained as missionaries, but suggests that’s not enough: “We were equipped formally…. But are we continuing to store up goodness in the middle of the journey? What are your thoughts?”

Everyone is silent for a moment, arrayed on couches and spare pillows on the wooden floor of a nice expat house. I look around and smile, and a little girl smiles back at me, wiggling her toes. The little Buzz Lightyear wiggles out of his mother’s lap, catching attention and estrogen smiles from the single women on my left.

A few people talk about how hard this task of developing a good self is: if we are always storing something in our hearts, and always affecting each other from what’s stored in our hearts… then how do we ensure we gather good into ourselves, and not bad?

After a moment, Leonard begins to read from his Bible again: “so a good man stores up good things—”

I wrote these notes in 2011, and now it’s 2014. I’ve evidently been holding on to my thoughts on missionaries out of concern: will it affect my life? Will it affect those who try to do good, if always in a contested and power-laden context?

But whenever I feel gut fear in talking about religion as a scholar and a blogger, I keep returning to the issue of courage. Again and again, when I introduced myself as an anthropologist and asked missionaries about their ethics, their core beliefs, they returned to the idea of being culturally sensitive, but also being honest and “bold” in sharing what they believed to be true. Allowing others to take it or leave it, to tell it straight or twist their words—but always feeling compelled to eventually tell what was in their hearts.

So while I don’t share the same evangelistic passion, perhaps as an anthropologist and writer, I’m in a similar camp. Instead of belief in the Book, I lean into the power of writing, of multiple narratives that give us a better picture of our social world. I believe that the stories I have—while not gospel—can still be gifts, something to be shared.

Leonard and his colleagues chatter some more, but he closes his meeting with one final thought: “The gospel is a rock that causes offense, but make sure the gospel offends, not you.”

The same can go for our writing—we measure our words and our hearts, write carefully, we tell it slant. But ultimately there are stories, good stories, that we want to have told. 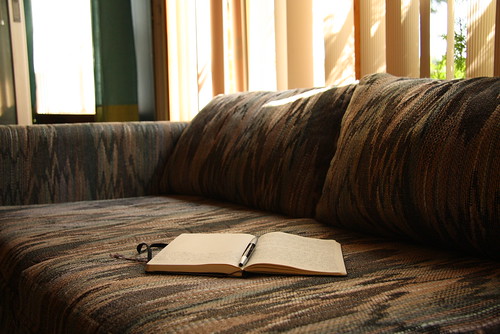