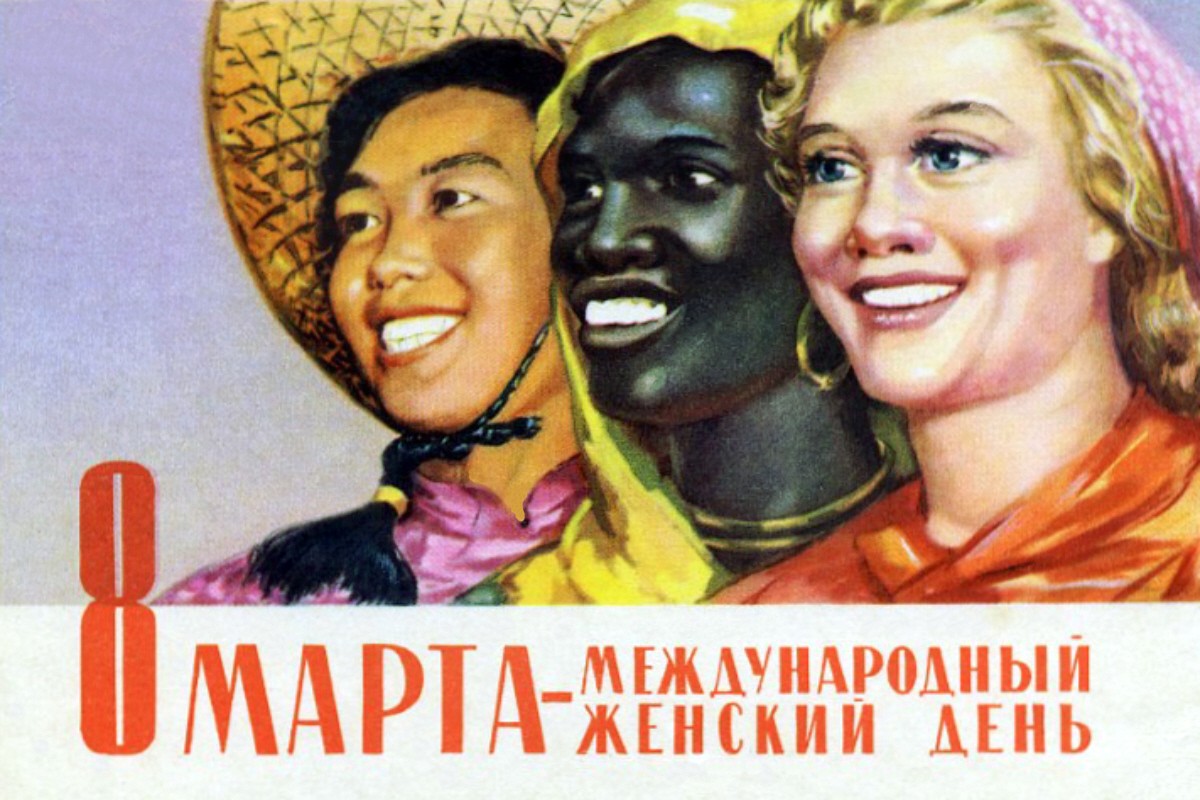 All across the former Soviet Union, and much of Eurasia, people celebrate every March 8th as International Women’s Day, a day to remember the accomplishments of women. Originally started in 1909 during the women’s suffrage and worker’s rights movements, the holiday was promoted by the Soviets, and has become a popular day for, uhh, card giving and workplace parties.

So when I showed up at work today, my boss Galiya Berikkyzy called me over and urged me to eat a dry cake with fluffy frosting in layers, along with a plate full of peeled and hardening orange slices.

My decidedly un-radical colleague Manya, who didn’t want to join the Women’s Central Eurasia Network if it preferred women in any way, surprises me by whispering in my ear that “the feminist in me doesn’t like it.” One day a year celebrating women, she felt, doesn’t address the way women are still pushed aside in other areas.

But after handing out some small presents—earrings, a pocket mirror—Manya and I join the entire library and IT department on our balcony. When we arrive, we find all the study tables have been arranged in a long row, library women on one side, IT women on the other, and IT men standing behind each woman: After an extended speech, each man handed a flowered box and a bouquet of red and yellow tulips to a nearby woman. Inside each heart-shaped box was a large teapot and set of teabowls, an “appropriate” choice of presents for women. We sit down and nibble the food before us: sausage pizza, orange ikra (caviar) sandwiches, sliced kiwis on an egg & crab sandwich, raw fish slices, skewers of meat and cheese. Adorable ladybug-shaped tomatoes with olive-heads perch on a bed of lettuce (take note, hostesses!). As I look around, I’m told that the men were each obliged to pony up for nice food and cutlery, and dressed in their best, they solicitously serve us pizza along with juice, wine, and tea. Just like with Mother’s Day in America, we’re all playing at role reversal, the men bending over to serve and care for women, prepare food, make surprises. Yet in the everyday, women still work primarily in roles serving men.

Today, though, women are honored. As man after man stands up to give a toast, Manya feeds me a running translation and commentary.

“We give you attention [vnimaniye] today,” one man starts, champagne in hand.

Just today? Manya smiles. She tells me the Russian saying, “Glavnoe—eto vnimaniye!” (Attention is the most important thing). This means, she says, that it doesn’t really matter which form the attention takes; what’s important in celebrations and gift-giving, is not how expensive your present, but “that you give a present (i.e., attention).”

And she also points out as each of the men mentions zhenskiye schast’ye , or women’s happiness, which seems to be contrasted with regular happiness. Women’s happiness has to do with beauty, the home, and family. Another man arouses much laughter from the audience when he toasts, saying that:

“Everyone talks about gender equality and how there should be a certain percentage of women in government or women scientists. But women are better than men. Men have to struggle to achieve something, but women can find their full potential as a person… she just needs to give birth to a baby.”

“I wish this was recorded,” Manya laughs, and I joke I should just tear up my four-page CV and work on procreating. “We’re working on the wrong skills!” she says.

But the next guy is more thoughtful, complimenting everyone and saying that at women in our library and IT department are good professionals and a pleasure to work with.

A fourth man stands up with glass of orange juice in hand, and expounds on women as the prekrasnaya polovina, the more beautiful half. He ends with a shout-out to “our devchonki !”

“Girls?” Galiya Berikkyzy shouts back. “All of us aren’t girls here!” she says, to laughter from the other older women.

Then a quiet man gets up, glass of wine in hand. He speaks thoughtfully about our work as librarians, suggesting that the men in IT and the women in the library complement each other. He says this is how the human race grows (rod chelovecheskiy rastyot), provoking laughter. Is the Library/IT department expected to develop the human race together?

“Oh… it’s just that… the amount of people increases as we hire more staff,” he backpedals. I think what he was trying for is a philosophy of complimentarianism, the idea that women do one thing (often less paid and less recognized) and men another. But overall it benefits everyone.

So I’m gratified when one of the finance women stands up, a mature lady in a beautiful embroidered jacket, and tells us:

Dear ladies, congratulations! I wish to you a great holiday atmosphere today, and as you return to your work all 365 days of the year. Be just as happy – it’s important to be happy!

There’s clapping and clinking of glasses after each toast, and the atmosphere is festive. It’s true the men have put together a beautiful presentation today, and they’re beaming with pride. And regardless of the continuing inequality of women across the world, in little and big ways, today we are happy…