So my friend *Lisa came to visit just as winter was setting in here, and we chose an extremely cold Monday morning to go walking around the city, catching a street-taxi to the left bank and seeing the sights. It’s bitterly cold, and a few days earlier the temperature registered as “-26, feels like -46” in Fahrenheit. Lisa’s petite and pink with cold, with bright blue-gray eyes. She wears ski gloves, jeans, and hiking boots, with a bright CANADA cap on her head, but as we walk we’re still getting colder and colder. She’s a little traumatized and posts later on facebook:

“It’s freezing!! There is no other way to describe it. I feel the condensation in my breaths freeze as they come out of my nose and mouth. When I put my scarf over my face, huge ice chunks form where my nose and mouth are.”

We end up running to Khan Shatyr trying to stay ahead of the cold, which obviously doesn’t work. My legs turn red and start to prickle, and as we walk around the main floor of the mall, taking pictures in front of the large Christmas tree and red-draped balconies with green wreaths, Sarah starts limping from pain. Her toe loses feeling and then starts to regain it as Let it Snow plays in the background (why would you play this is Astana??), so we sit on the food-court balcony and look over the giant Christmas tree and bored shopgirls from above.

We talk about grad school, and Lisa admits that some people think I’m a secret missionary because I’ve researched secret missionaries — ahh, so understandable and yet so frustrating! I got turned down for Fulbright again, and I suspect it’s this confusion over how someone could be religious, do research on missionaries, and yet not be a missionary herself. I would just like to note that this is very definitely possible, and I’m an example of someone who is not-missionary. Ok, off the soapbox 🙂 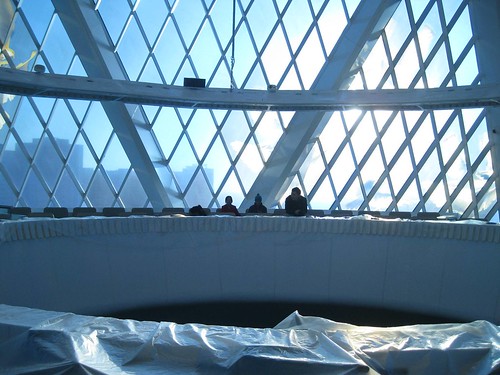 After eating much-recommended Uzbek laghman at the Keruen mall, we visit the Pyramid, aka the Palace of Peace and Reconciliation, which I hadn’t seen before. Here Kstan holds religious conferences with the “approved” religions such as Hinduism, Sanafi Islam, and Russian Orthodoxy, avoiding cults like the Baha’i and the Baptists. At any rate:

It’s a dull gray triangle from the outside, engulfed with snowbanks and without an obvious entrance… (that’s the utility entrance you see there). But after circling the Pyramid like clever grave robbers, we find a wonder and a beauty inside, cleverly designed by Norman Foster. There’s a plush-red-chair and wood-paneled opera house in the heart of it, filling three stories and surrounded by a black-walled and mirrored entry hall with bright lights that give you the sense of being in a rather glamorous cave. There’s a classy-looking juice bar, and a coat-check where you get an appropriately pyramid-shaped nobbin in turn for giving your coat.

A pretty curly-haired girl in a red suit gives us the Kazakh-language tour, which includes a handy comparison chart that emphasizes that the Pyramid is bigger than the L’Arche de Triomphe and Bayterek is bigger than the Taj Mahal. Who has culture now?! A diagonal elevator takes us up to a floor exhibiting Egyptian archaeological replicas, such as the first replica of Nefertiti’s head. This is more important, apparently, than the second replica, and so it’s only on loan from a prestigious museum abroad.

From there, white stairs wind their way beneath walls of fake moss, to the top of the Pyramid. At the summit, a large white table surrounds a serious drop to the lower floors, with microphones for formal conference sessions. I assume the white chairs set behind the table are for the lowly interns who will take notes and serve coffee! There’s a glass elevator that’s only for dignitary use, and beautiful bright painted doves fly up the sides of the pyramid towards the golden-glass peak.

In the peak, we see a bearded Parisian documentary filmmaker and his red-haired French assistant in a blue cap. The Parisian’s toting a large videocamera, and asks if we’ll give some quotes for a documentary. I put on lipgloss and say how wonderful Kazakhstan is, and Lisa slumps quietly to my left, saying only, “I agree with what she said.” She later tells me she doesn’t know these people, and doesn’t want her image to be used in unpredictable ways. Which I should take heed of. With all the “let’s visit the library American librarian” tours we have, and the awkward interviews I’ve given in stuttered Kazakh to local TV stations, I’m not really sure I have any control over my image at all!