I’ve briefly covered this before, but Aitys (“saying-to-each-other”) is a classic style of Kazakh musical performance, where two court wits dual out a commentary on society, while strumming a two-stringed dombira. Eva-Marie Dubuisson has written all about aitys, if you’re into that sort of thing.

I’m not sure what ancient aitys would have looked like–but probably no indoor stage and microphones! I’ve never attended a modern state-sponsored competition, but I get the impression they involve long rounds of singing and playing, with formal language and atmosphere that requires a very good knowledge of Kazakh. Here’s a fairly recent video below:

And then there’s Aitys Star…

So my housemate and I were astonished when flipping channels last weekend to come across Aitys Star, which seems to be a fifteen-minute wry and hyped up game-show take on this classic ‘tradition,’ with lots of audience laughter. Let’s see… 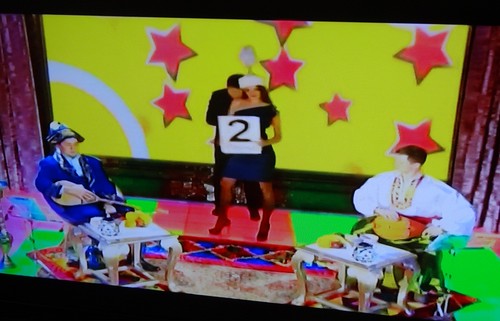 2. The “Ukrainian” guest rapping about Kazakhstan in Russian: 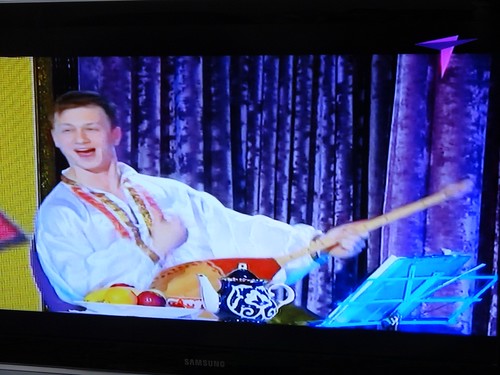 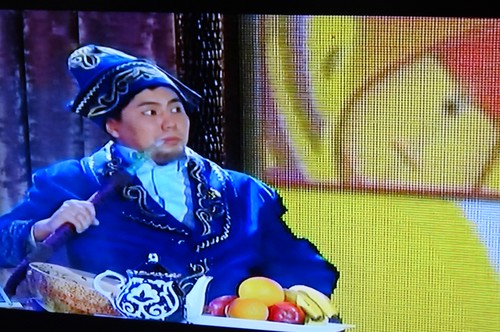 4. And at every musical interlude, a Kazakh girl in traditional dress dances saucily on a high stage! 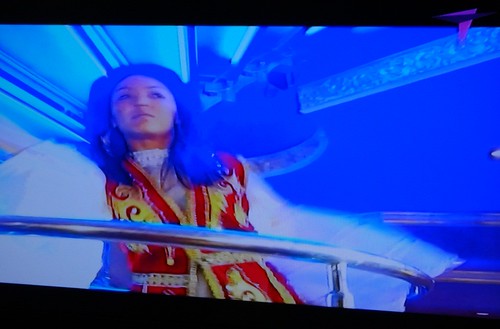 I snapped the pictures above from the TV, because as soon as I saw it, I knew I would want to share it with my peace corps and grad student friends! It’s eye-catching to see something formal, that was once probably informal, be re-worked back into the popular culture of today.

I couldn’t find the episode I saw online, but below’s another episode, this one with a Russian-speaking “Chinese” aitys-dueler. Even if you don’t speak Russian, flip briefly through both videos to get a sense of the difference.

I’d love to hear if you can think of similar examples of tradition becoming game-show-y!