It’s begun snowing quite a lot in the past week, and it’s getting colder. But according to a recent news article, local architects are interested in building a giant dome over the government and financial area of Kazakhstan’s capital. The article claims this is already being done in Houston, where a mile-wide dome would enclose “a business center, green areas, and luxury housing,” protecting us poor Americans from tropical winds and oppressive heat waves. (I don’t believe it, but I look it up. It seems to be a serious proposition in Houston. An American website claims an “army of dirigibles would be needed to help build the chicken-wire and bubble-wrap scaffolding over the city!)

“Here in Astana,” zakon.kz reports, “the construction of such a structure would completely solve the problem of cold weather and would attract millions of tourists to the city.”

“This canopy can act as a giant greenhouse,” as Astana architect Eugene Nevelichkov is quoted. “The construction of the dome of the capital of 1.5-2 kilometers in diameter would cover almost all of the major targets of the left bank. Astana would be transformed into a blooming garden all year round.”

This sounds amazing. I’m hoping they put a dome over our school, so the playground becomes a greenhouse garden rather than a frigid landscape of rocks, snow and concrete in the winter. 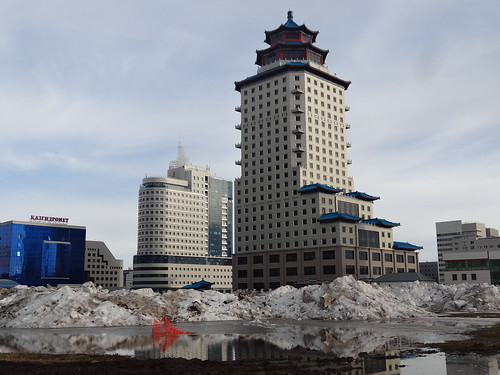 But in the meantime, I see that our elementary school students have been working on their own yurt, and mockups of local landmarks Bayterek and Pyramid. Very stylish. Maybe these budding architects will be the ones to make us a lush garden on the winter steppe!