It’s Sunday morning soon before church in September. Lana, a Russian friend, is just setting down with a cup of tea, a new tin of sweetened condensed milk, and fresh crispy toast on a small platter. She pulls her bibles (!) to the side of her, neatly folds her hands, and spends an extended time praying in front of the table, eyes closed, light brown hair neatly brushed, back straight.

When Lana begins sipping her tea, I sit down too. I ask about the bibles in front of her, and she tells me that the larger one, a green hardbound book, is a svyatiy pisania, or “holy writings.” (I think this is a modern translation, and not the official Russian Synodal or old Slavonic variation, which might be why my work rejected it when a local girl tried to bring in bibles for donation.) And a little blue one, which is full of sticky notes and is well-thumbed, is a new testament, she tells me – her first bible.

“I became a Christian two years old,” Lana tells me. “Oh really?” I say, trying to make conversation, “I was four.”

Lana looks at me confused for a minute, then says it was two years ago, nazad. She was in her third year of college, and searching for God. She knew she was Russian Orthodox, as she describes it, but no one could tell her anything about what that meant. Then she met Sofya. “Everyone said, oh, you’re a Christian, but no one really asked me,” Lana says. But Sofya, a warm and friendly girl, was the first one in this city who asked about her heart (“o moem dushe”). 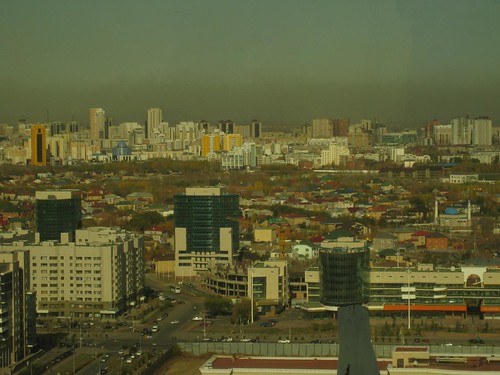 This is interesting to me because I study religion, and specifically Christianity in Central Asia (hence all the stories about it here!). It already sounds like a good example of a conversion narrative — someone isn’t strongly attached to their current religion, they’re looking for meaning, and a friendly person comes alongside who can tell them more about another faith, or a new and more interesting version of their current faith.

This is the sort of thing I hear from missionaries from the west – that the Orthodox church is dead, that evangelicals are needed to bring new life to Central Asia. Just as my own views on religion and society changed as I was shaped and trained as an anthropologist, I wonder how Lana’s views have shaped and changed as she was trained in evangelical lifeways, something it’s clear she’s internalized:

“At that time,” she says, “I thought I was a Christian and I told other people so. But I didn’t like to go to church, and didn’t know Isa [Jesus] like I do now.”

Now, she invites me to go with her to an Orthodox church sometime, which is “very old and beautiful.” But we’ll only want to be there an hour, she says, because you won’t understand anything. And then we can go to her church, where it’s modern and evangelical and understandable to us both. She offers cherry jam and sweet milk to me just before we head out to our respective modern churches.