The other day, Aiza, an older friend, told me that her son just arrived from Almaty. Oh, how’s your son? I ask. Well, he wants to move to Almaty, she said, clicking her tongue a bit, and shaking her head. Aiza is forty or a bit older, with fresh black hair, gleaming glasses, and a beige suit-jacket. She tells me that her son, Dastan, grew up here but went down to Almaty after graduating this spring. Now he’s back — but he’s just let her know that he plans to move to Almaty and get a job. Aiza spent the morning trying to dissuade him, telling him that he’d be better off up here.

Aiza adds that Dastan is actually the son of her brother, Abilai, but that she raised the boy as her own. Dastan’s mother died when he was in elementary school, and I guess his father, Abilai, couldn’t care for him. So Aiza and and her husband took him in, and when they moved up here to Astana they brought Dastan. His father, Abilai, stayed behind for work.

“He calls me Mom and my husband Papa,” Aiza says proudly, “and he’s our child.” 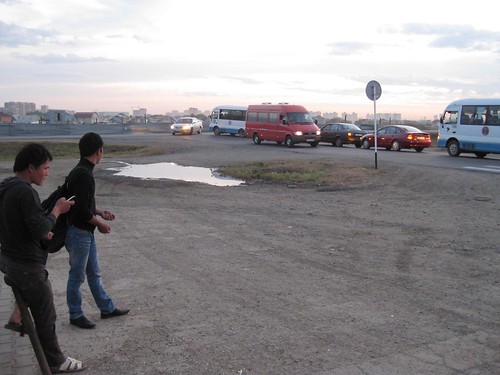 …After leaving her, I wonder about this country. Almaty was the traditional capital from Russian imperial times, through Kazakhstan’s independence in 1991. But in the mid-1990s, the country decided to move their capital from the lovely mountain climate in the south (Almaty) to the frigid steppe in the north (Astana), in many ways as a land grab to prevent northern Russian-speaking provinces from breaking away. The project has generally worked, and I suppose it’s a boost to the economy that there’s constant movement between the two cities. And I know that there’s always been migration, and regional trade, and movement between the regional centers and the capital(s).

But I wonder about what happens when families are split apart by this, torn one way and the other, trying to build a life from two ends…