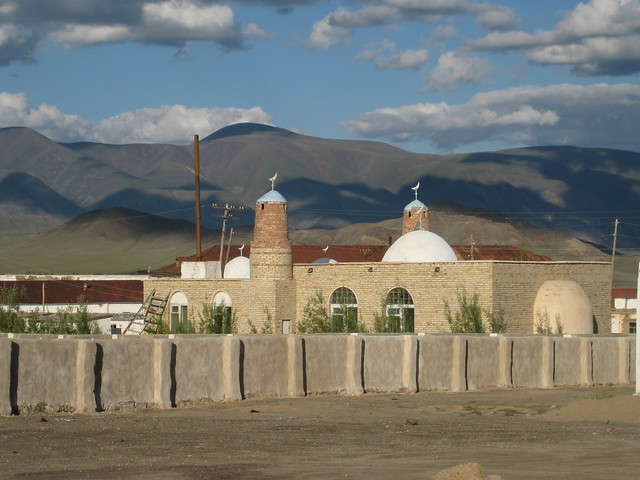 Below is one of my favorite sets of interview notes from the summer, in which Professor Sarah* took notes and I wrote about the context. We were assisted by two local women, “Sunlight” and “Flower.”

We are sitting in the side room of the mosque interviewing a man. There is a huge book in front of him, blue with Arabic lettering, maybe 1.5 feet high. He wears a faded brown suede cap and a white and blue button up short sleeve shirt which hangs from his shoulders, a touch too big. He has one pen in a shirt pocket, and his arms are wrinkly where they touch each other as they cross. He has warts and scars on his fingers. Has a broad body and a tall face. He rubs his short mustache between his fingers as he talks so you cannot see his mouth.

Sunlight asks questions, as Sarah takes notes. Flower and I are not doing much. We sit around a blue wooden table (or two desk pushed together) with green and brown legs, and sit on narrow blue benches. Strewn inside the table/desks are crumpled candy wrappers and paper towels.

The window is open and there is a stack of pastel blankets in the corner, pink and green with faded cartoon piggies. Behind the blankets is a bright purple metal coat rack with cheap gold knobblies for the coats. There is a lockbox to my side. There are bare walls here, a green sheer curtain over the door window, and holes in the wall all on one side, with two small nails at the edges of the wall, as if something large was once hung there.

Sarah is stressed at not getting in depth answers from interviewees – ‘yes,’ ‘no,’ ‘don’t know’ – at how they speak simply to get it over with then open up after the interview, once we no longer have translators working or notebooks out. Sunlight keeps skipping questions or doing unnecessary sub-questions as we talk, not following or paying attention at all.

Gender question five: no. (Sarah just gave me a stern look for not writing).

I smell manti dumplings through the windows, and can still smell the mint we first smelled as we stood outside between the last interview and this one, looking at some marker stones in a grate. Through the window we can see low blocky white walls all over and frizzy green treelets. We get into a debate over a five year old boy who is said to have died of Kazakhstan water, two months after returning to Mongolia.

Sunlight is doing rapid fire questions and clarifiers, racing through questions and translating answers shortly – e.g. “bilmedi” (he doesn’t know) after the interviewee said something long. But what does he not know? Sarah asks. Flower answers her phone, “bar ma?,” and disappears into the hallway for the rest of interview. She comes back in, grabs her bag, and goes out again. I’m jealous.

The interviewee has a wrinkly brown pink face, brown short hair, straight chips of it with grains of gray and white. His eyelids fold over and rest on the whole of his short eyelashes, little fleshy visors for his eyes. He has greybrown hazel eyes. We can hear birds outside, ourselves shifting and writing, and Sunlight pressing the snaps closed on Flower’s cloth hat, then jerking them open, again and again at the same time as she asks questions. She rocks back and forth on her bench.

The wind blows the door open, and I pull it closed. I could feel Flower’s push from the other side, she’s doing God knows what – I don’t think she’s on the phone now. She’s in an atrium area, with benches and heating pipes that run like a frame around a large poster of the Kabba at night, shown floodlit and surrounded by people. Are the pictures true? Is it ever alone?

Sunlight sets the hat on her head, then lifts it up above her head then sets it back on her head, repeating for several minutes. The interviewee has crushed flowers stuck to the bottom of his sepia arms, pressed in little green and white dents. He has lots of veins and knobblies under his skin, too. There is one cracked white kese (teabowl) on the blue table, with red roses on its side.

Sunlight is flipping her long black hair back and forth as we finish the interview.