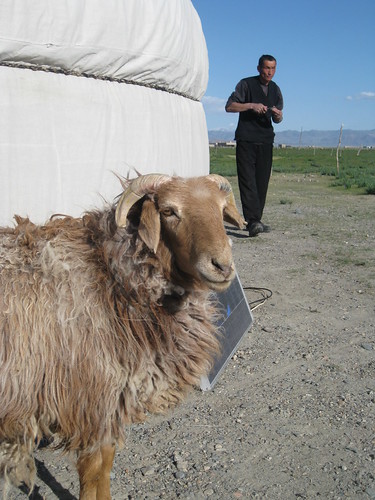 In the past two weeks, my fellow student Jamie got quarantined in China, we missed our flight to Ulaanbaatar, were detained for 12 hours because of bad weather, flew to another province called Khovd, took a seven hour ride over bumpy dirt “roads” to Ulgii, and Jamie and I both got pretty severe colds.

After all that, we left Ulgii five days ago to do interviews in a rural pasture area. When we arrived we helped Soul set up a ger, a circular yurt that’s maybe 20 feet across. It’s built around a lattice frame and covered in cloth and felt, including old blue jeans for added warmth. Inside is beautiful embroidery. The yurt has two beds (for Soul, his wife, and their two toddlers), a low table for serving food, two cabinets, and a stove. It’s probably a little larger than my parents’ RV, but feels much bigger, because of how open it is.

After setting up the ger, we set up four smaller tents on a bumpy plain with crocuses growing in bunches. I’m guessing that’s where last year’s manure had been. The climate is high and dry, and people don’t drink water, just tea. At night we saw tons of constellations, and one morning when I woke before dawn, I could actually hear the flapping of bird wings as they flew overhead… it was just that quiet.

Every day in the countryside we woke to Soul telling us “Shai Ish!” (drink salty milk tea) and “Baursak zhe!” (eat fried bread). We drink tea at every house, along with hard candies, sugar, and butter. People eat the fried bread for most of their meals, with perhaps one substantial meal of noodles and mutton.

We got a sheep slaughtered for us on our second day in the countryside. I watched its throat get slit, and its skin peeled off, and left when they started snapping its legs to make the dismembering easier. When I returned, there was just a sheep fleece on the ground, a few legs in the grass, a bowl of intestines soaking in blood, and a stomach being scraped of its lining. I was told that I missed a great ethnographic opportunity, but… I’m pretty much fine with that!

Soon after it was slaughtered, we were served sheep head, a great delicacy. I was given sheep cheek, tongue, and other meat parts, but successfully avoided eye and brain — by keeping a piece of noodle in my hands at all times, and avoiding eye contact. My fellow student, Jamie, was given an ear, which he described as “foul cartilaginous mass covered in disgusting blackened skin and tiny fetid ear hairs.” He’s not an anthropologist, so he doesn’t have to be nice about it. Worse yet, when Soul was popping the eyes out of the skull, some eyeball juice squirted directly into Jamie’s eyes!

I did get the chance to ride a horse a little, which I really enjoyed, although at the time I was being led away from camp by Fellow, a short joking man who has decided that since he and I are the same age, we should get married. Fellow proposed a few days ago, and last night he took me for a ride on horseback. Sarah threatened to sell me to him for a few horses, which I am pretty sure that she loves more than research assistants. I think they’re joking, but only partly, and now I’ve been nicknamed Kelin (daughter-in-law, for my imminent marriage)… and Sebizgul (Carrot-Flower, for my red hair).

We left Fellow and the countryside today, slipping back into Ulgii past the quarantine guards. Yes, apparently there is a case of bubonic plague in one of the outlying towns, and as a precaution they’ve quarantined the province. I’m not sure exactly how we got past – bribes, acquaintances, an invented itinerary – but they’ve closed down all the restaurants. I’m currently in an internet cafe with a handful of grubby boys, so again… wildly inconsistent.

Love and miss you all!