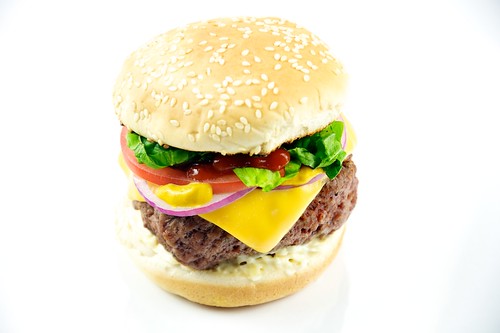 I participated in a taste test for a major restaurant chain today.

After responding to a Craigslist ad last month, I was told to show up today at 5pm to evaluate a product in development at “Greaseburger Labs.”

Sitting in the waiting room, I observed the other testers. A handful of soccer moms looking for a little extra income; several overweight and unemployed men; and a few young women, just married or in college, with a little time on their hands. A boy straight out of “Grease” showed up late for the 4pm testing then shuffled his way out of the building when told that he was too late.

At five, Willy Wonka showed up. Or, Willy if he had been a little blond man in business casual with a weasely smile. Turn off your cellphones, he ordered, this is a sensory experience.

Then he opened the testing room door.

We entered a long, (white) narrow room and were each assigned to a mini-cubicle, hidden from others’ sight by (white) plastic dividers. Everything was modern: clean, bright, and glowing. In front of me sat a (white) computer, a (white) plastic tray with (white) paper liner, and bottle of water (I think it was actually blue). I stared at the wall, in which was set a little window, blocked by a (white) panel. After a few minutes, the panel slid up, a rubbergloved hand set a burger on the tray, and the panel slid down before I could thank the hand.

So much for the customer-service aspect of presentation.

As I ate the product, creepy Willy paced behind me, up and down the room. But other than that, I was in my own (white) little world, chewing and answering the computer’s questions.

Just as I answered the last question, I heard Willy behind me. He quickly ushered me out to the lobby, and a lady handed me $25 in an unmarked envelope. Is this legal?

Sensory experience indeed. I’m still not sure what make of it, or of the sponsoring company.