“Thank you for calling Cedar Point Central Reservations, my name is Celia. How may I help you?”

Yep, this summer I took a job at Cedar Point, an amusement park in Sandusky, Ohio. Sandusky is a lake town with one Wal-mart, 53 hotels, 10 bars, 43 churches (more on that later), 5 miniature golf operations, and 42 overpriced gas stations.

My job is to answer phones for the Cedar Point hotels, and list rates and book rooms for customers. A room with two queen beds and a coffeepot is like $240 plus 12% in sundry taxes. When squawky customers ask for a better rate, we do offer rooms for $120. These, however, come without the coffeepot, without the wallpaper, and without the ceiling, doors, or floor. Cedar Point is not a cheap place. 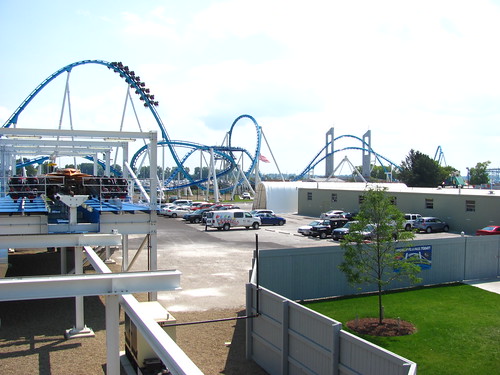 But on my days off, I wander the park (with it’s “Seventeen roller coasters!”) for free. I’m not a fan of the coasters, though. I think saying “Honey, let’s go on a roller coaster,” is like saying, “Honey, let’s go on a car accident!” You latch yourself in then speed forward, jerk sideways, halt, your stomach drops, you spin upside down, get whiplash, fly up in the air, jerk, drop, spin…

You don’t have to pay an entrance fee to experience this, people!

Cedar Point also has middle-school spinny rides (which tend to creak as if preparing to fly apart), good-view rides favored by the elderly (these float you up to thin-air regions, all for the sake of a different view of the bathrooms), and the kiddy airplanes that whirl gently three feet above the ground. I’m a bit jealous of the three-year-olds who get to ride the kiddy airplanes. These seem like my type of ride.

If the guests don’t like rides, we also have food. It’s about $5 for a hamburger, $5 for an ice cream cone, and $5 for a soda. It’s probably about $5 for a napkin as well– plan $5 for any food related item that you might want at this park, including a packet of salt. As an employee, I buy my food at a cafeteria, so my hamburgers and salt packets cost only $2 apiece.

As a Cedar Point employee, I also get to live in the women’s dormitories, which are surrounded by high fencing with a guard shack in the front. The long, dimly lit halls have metal pipes running the length of them and crossing at regular intervals. Girls from Russia, America, Bulgaria, Japan, and Singapore cluster according to nationality. Most girls are horrified upon first sight of the dorms–but after my stomach settled I’ve continued to be amused. This is exactly the sort of place that awakens my sense of the dramatic: it feels like we’re living in some ghetto Soviet work camp, but this feeling only lasts till I notice the Pepsi, Pop-tarts, and Glamour magazines stashed between the mismatched dressers and metal bed frames in our rooms.

I share my room with a girl from Milwaukee, Wisconsin. Rachel* is a music major with an eclectic CD collection (Dave Matthews, Rich Mullins, Beethoven and Bach, Andrew Lloyd Webber, and some indie musicians), a wardrobe consisting entirely of sorority shirts, and a diet composed of pop-tarts and ramen noodles. Our room has walls painted in an off-white, patchwork fashion, a tall narrow window with pale blue curtains, floorboards with peeling white paint, the standard exposed-pipe-running-across-the-ceiling, two metal beds, a sea-green chair with burn marks, and two dressers (one metal and one wooden, with oddly matched shelf paper). Also two rows of clothes hooks on the walls. It’s rather absurd.

In dealing with all of this, I decided to find a church in the Sandusky phone book last week. I couldn’t find my home church, Vineyard, so I read the church section from beginning to end, looking mostly at the larger ads. There was “Faith Assemblies of God,” which sought families, singles, youth, and the elderly. There was “Zion Lutheran,” with a Saturday service to fit my work schedule. There was “Veno Kahil’s People of Destiny”… a church? the next world cult? an exercise group? I wasn’t quite sure. An ad for a “Spirit filled” church made me wonder whether they would change their advertising if the Spirit left them. There was a very friendly Mormon church… a Pentecostal church… three Baptist churches… After a half hour of reading I was still befuddled, so if anyone knows of an incredible church (preferably NOT the People of Destiny) in Sandusky, Ohio, I’d be pleased to hear of it.

So far I’ve learned a lot from Cedar Point. We employees got to play the park games free one evening, and I got seventeen shots total: throwing basketballs, aiming at milk bottles with beanbags, tossing baseballs at baskets, footballs at tires, and bouncing wiffleballs off boards in the general direction of baskets. I missed every shot. Even with getting a CP hat as a sympathy prize, I won’t ever pay for those games after seeing the difficulty firsthand!

I’ve also learned from my job; taking reservations has taught me that I would hate a cubicle/phone job if I had to do it for any length of time. Good news is that I’m dealing in a Dilbert sort of fashion, by drawing highlighter art on scratch paper and writing unintelligible poetry in Russian. … but for now, I’ll be here till mid-August and will try to write more before then!